In the RSS dataset, 2010 was the second warmest year on record in the lower troposphere (TLT), the middle troposphere (TMT), and near the tropopause (TTS).  This can be seen in the plot below, which shows the average global temperature anomalies for each of MSU/AMSU channel.  The anomalies are sorted from low to high and are represented by bars color-coded by the year that the anomaly occurred.  Blue represents the beginning of the time series in 1979, and yellow represents the last complete year, 2010.  In most surface temperature datasets, 2010 was the warmest year on record, often followed by 2005, which differs slightly from our results, where the warmest year in the troposphere is 1998.  For the lower stratosphere, 2010 was cooler than the 1979-1998 mean, but was not an extreme year, falling near the middle of the distribution.

In the figure below, we show a map of the lower tropospheric (TLT) temperature anomalies for 2010 relative to the 1979-1998 baseline.  A majority of the globe shows above normal temperatures, with the largest positive anomalies in a band from North Africa to Central Eurasia, and over the Hudson Bay and Greenland.  Smaller regions of negative anomalies occurred in Eastern Asia, the Northwest Pacific, the Northern mid-latitudes in the Atlantic, and in the southern oceans near the Antarctic ice edge. 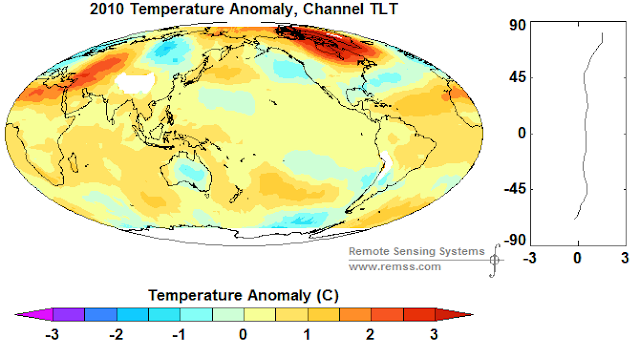 The troposphere was warmer than normal over almost the entire (observable) Arctic Ocean, which is easier to see using this view from above the north pole, (latitude range 30N to 90N) using the same data as us used for the map above.  The white dot directly over the pole is the part of the earth that is not observed by the satellite due to its slightly tilted orbit. 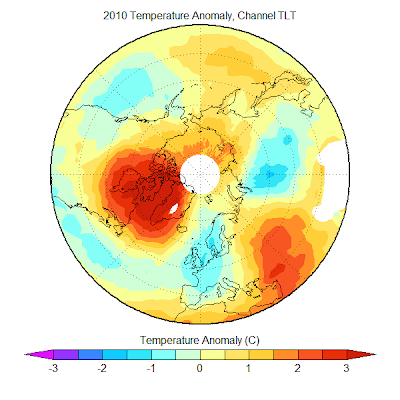